Maps may also start with neutral towns, which do not send out heroes but may still be captured by any player. It is therefore possible, and common, to have more towns than players on a map. When captured, a town retains its alignment type, potentially allowing the new owner to create a mixed army.


A player or team is eliminated when no towns or heroes are left under their control. Barring any special conditions, the last player or team remaining is the victor. A side objective commonly appearing in the series is the acquisition of a powerful object called either the grail or the " ultimate artifact ," buried under a random tile on the map. As heroes visit special locations called obelisks , pieces are removed from a jigsaw puzzle-like map, gradually revealing its location to the player.

Once found, it confers immense bonuses to the player capable of breaking stalemates: the grail can be taken back to a town and used to build a special structure, while the ultimate artifact provides the bonuses directly through possession. Each turn consisting of all players' moves is represented as a single day , and days are organized into cycles of weeks and months measured as four weeks. The primary resource is gold , which is generated by towns on a daily basis.

Gold alone is sufficient for obtaining basic buildings and most creatures. As construction progresses, increasing amounts of secondary resources such as wood , ore , gems, crystals, sulfur, and mercury are required. These resources, as well as gold, are produced at mines and other secondary structures, which are located on the map and require heroes to capture them.

As with towns, mines can also be captured by enemy heroes, presenting an additional avenue for conflict. At the start of each week, creature dwellings produce new recruits. In some of the games, the start of a new month causes neutral armies to spawn all over the map, providing fresh challenges and opportunities.

Whenever a player engages in battle, the game changes from the adventure map display to a combat screen, which is based on either a hexagonal or square grid. In this mode, the game mimics the turn-based tactics genre, as the engaged armies must carry through the battle without the opportunity to reinforce or gracefully retreat. With few exceptions, combat must end with the losing army deserting or being destroyed, or paying a heavy price in gold to surrender. 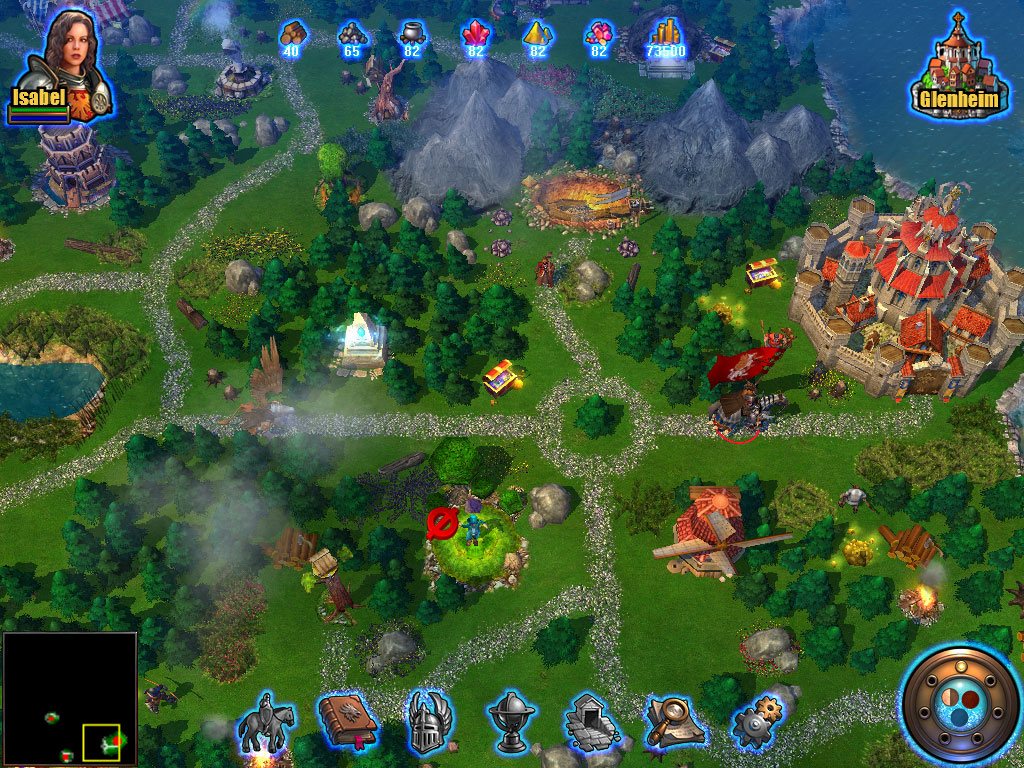 Surrendering allows the player to keep the remaining units intact. Creatures in an army are represented by unit stacks, each of which consists of a single type of creature, in any quantity. A limited number of stacks are available to each army, varying by game. Players generally maneuver their stacks attempting to achieve the most favorable rate of attrition for themselves.

The games also have an automatic combat option that allows the computer to make tactical choices for a player. Heroes participate in battle as well: passively by granting bonuses to their army, and actively by engaging in combat and casting spells. In most of the games, heroes do not act as units, and cannot be harmed.

Surrendering allows the player to keep the remaining units intact. Creatures in an army are represented by unit stacks, each of which consists of a single type of creature, in any quantity. A limited number of stacks are available to each army, varying by game. Players generally maneuver their stacks attempting to achieve the most favorable rate of attrition for themselves.

The games also have an automatic combat option that allows the computer to make tactical choices for a player.

Heroes participate in battle as well: passively by granting bonuses to their army, and actively by engaging in combat and casting spells. In most of the games, heroes do not act as units, and cannot be harmed. However, in Heroes IV they do act as regular units and can be "killed"; these dead heroes are transferred to the nearest town's dungeon where they can be freed if their team captures the town.

Combat is affected by several random factors. In addition to simulating dice rolls to determine damage, a variety of influences including hero abilities and special bonuses determine a unit's luck and morale ratings, which affect the likelihood of those units triggering a bonus during combat. A unit that triggers good luck deals more or receives less damage, and a unit that triggers high morale receives an extra turn. In some other games, luck and morale can also be negative, with opposite corresponding effects.

Luck and morale can be improved by hero abilities, artifacts, and spells. Morale may suffer with overwhelming odds in combat or by mixing incompatible unit types e. Chaos with Order. Heroes II introduced secondary skills.

Heroes can learn a limited variety of secondary skills with several levels of proficiency. Secondary skills give specific, miscellaneous bonuses to heroes and their armies. For example, skill in logistics increases the distance a hero's army can travel, while skill in leadership gives their army a morale bonus.


Beginning with Heroes II , some creatures were able to be upgraded. By Heroes III , every creature excluding those not found in any castle was able to be upgraded. Heroes III also introduced a new artifact platform; rather than having 14 spaces for any artifact, the player instead has a much larger backpack, but can only use a limited number. For example, only one headpiece can be used at a time, as well as only one pair of boots, etc.

Several fansites collect and rate user-generated maps. Up until Heroes of Might and Magic V , the Heroes series took place in the same fictional universe as the Might and Magic series, and later Might and Magic installments heavily referenced the games, with some taking place in the same world. Heroes I and II take place on the planet of Enroth, on a northerly continent of the same name, and chronicle the adventures of the Ironfist dynasty. The protagonist of Heroes I is Lord Morglin Ironfist, a knight who discovers a portal to the realm of Enroth while fleeing from his throne's usurpers, and goes on to conquer and dominate the continent, establishing a unified kingdom and a new rule.

Heroes II featured a two-sided conflict between Morglin's sons, Roland and Archibald, both vying for their deceased father's throne. Canonically, Roland defeats Archibald, though the player can choose to align themself with either side. It was the first game in the series to feature playable heroes as campaign characters—the main characters of Heroes I were represented by the player's presence rather than as commanders on the battlefield.

The storylines of Heroes III and the Heroes Chronicles shift focus to the Gryphonheart dynasty on the southern continent of Antagarich, and introduces the Kreegan as playable characters and enemies. Heroes III ' s expansions build on the setting with more prominent character development, featuring new and old heroes from the series in differing roles. The ensuing destruction brings about portals leading to another world, Axeoth, through which many characters escape. Heroes IV ' s campaigns focus on the scattered survivors from Enroth and Antagarich as they form new kingdoms and alliances in the new world.

Heroes of Might and Magic V was the first Might and Magic title to take place on the previously unheard of world of Ashan, as part of Ubisoft 's franchise-wide continuity reboot. Its six campaigns are each centered around a faction leader, tied together by the character of Isabel Greyhound, Queen of the Griffin Empire. The Heroes V expansion packs both continued this storyline, leading into the events of Dark Messiah of Might and Magic.

Heroes VI acts as a prequel, occurring years prior. Critical reception for the series has been generally positive, with GameRankings scores averaging from the high 70s to high 90s. Heroes 5 - DEMO. Heroes 5 - Wallpapers. Heroes of Might and Magic 5 - Music. Heroes 5 - Academy - Heroes biographies.

Dark times threaten this land once again. Zoltan, a powerful necromancer, has allied with the orcs of the north and threatens to conquer the kingdom of men.